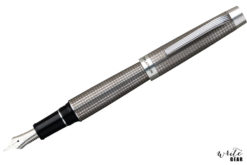 Created based on the design of “Platinum Platinum ” launched in 1967, the body made of solid silver is applied with a lattice pattern through the best decoration technique. In addition, the body design reminiscent of “Platinum Platinum” fountain pen has been realized by filling the grooves with black ink. It comes with a rhodium-plated 14K gold nib, which is also employed for the platinum’s representative #3776 CENTURY fountain pen. Enjoy the graceful appearance unique to the silver body.

Released on Feb 5, 2019, The Prime is a 100th Anniversary Limited edition with only 2000 of them worldwide. Each of the limited 2,000 pieces comes with an engraved serial number on the upper part of the back of the body and the special pen nib is engraved with an anniversary commemorative logo.

The Prime comes with the following in the box: 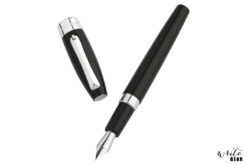